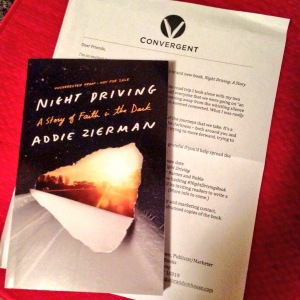 (Read this from Addie first.)

There are three things you need – “school supplies” if you will – for reading Addie Zierman’s “Night Driving: A Story of Faith in the Dark

I didn’t think of it until I got to the part where she drives through E-town and mentions it, but I should have put it on from the start. After all, my own year of literal road tripping through metaphorical darkness included a lot of this playlist.

Most memorable and significant was my drive away from my life in Birmingham to the uncertainty of a short season in Dallas. I put on this soundtrack and just let the memories and mourning and healing begin as I drove through small town after small town. In case you don’t recall that particular story of this past year, my parents and I loaded up my belongings in a U-haul over Labor Day weekend. I followed them alone in my car, which was very good for my soul as I processed what had just happened over the past four months. Well, the past four years, really. And like Addie, the open road proved the perfect place to ask God some big questions about where I was going. If only life were as simple as plugging an address into Google Maps. But that isn’t faith.

Addie writes that she had countless people tell her how brave she was for taking a road trip from Minnesota to Florida with a two-year-old and a four-year-old in a minivan in February 2014.

Though I have never made THAT particular trip, I do know what it’s like to drive across the country and have people tell you you’re so brave for doing it. When, in reality, it’s so much more complicated than that. When you’re only certain of one thing: that it’s the right thing to do.

It’s hard to leave it all behind. It’s hard to stay when things aren’t what you thought they would be. It’s hard to sit in the grief and the grittiness of daily life, knowing no matter how fast or far you drive, you can’t outrun it.

Sometimes brave faith is actively not running away, gathering your community around you in mutual brokenness, and putting on a quirky cult-classic chick flick of a movie that you’ve watched a hundred times with a dozen different friends.

And sometimes, brave faith is putting on said movie’s soundtrack and hitting the road.

Well, not so much a highlighter specifically, but a willingness to engage your own story as you read and make your copy as ragged as the elements of your past it might bring to the surface. I just want to make sure you are prepared for dog-eared pages, notes in the margins and neon-yellow streaks (and maybe a tear stain or two if you’re the cry-while-reading type). 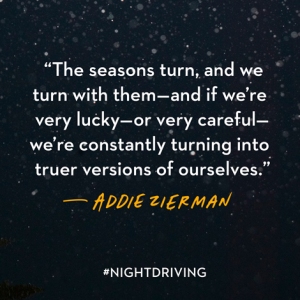 What I’m trying to say is, through telling her story, Addie might make you reflect on your own. How you would tell it to a stranger. That messy, twisted journey of sunshiny new faith to doubt to apathy to peace. As we Whovians like to say, time (and thus, faith) is non-linear. It’s not a strict cause to effect. “It’s more like a great big ball of timey-wimey, wibbly-wobbly… stuff.”

And if there is any true way to describe a relationship with Jesus lived out over a long period of time, it’s wibbly-wobbly.

At least, mine is. I venture Addie would say the same. And the people she meets up with or mentions along the route.

Maybe you won’t read the whole book in one afternoon like I did. In fact, I’d advise taking intentional breaks. It’s one of those books you need to digest. To take a step back from at points and let it soak so you don’t read it like a magazine story or a simple anecdote. Behind every detail recalled is a scene-setting morsel, making it all the sweeter when you realize along with her what was really going on under the surface.

Addie engages with this question throughout the book, first posed at a large teen ministry conference in her youth group days. If you’ve read her previous, “When We Were on Fire: A Memoir of Consuming Faith, Tangled Love, and Starting Over

,” you know how that story goes. But this book is more about having faith that He is, in fact, real, but not being able to feel Him. It’s about what Barbara Brown Taylor describes as “the gift of lunar spirituality, in which the divine light available to me waxes and wanes with the season” (“Learning to Walk in the Dark

Indeed, “Night Driving” feels like the practical application or, perhaps, one woman’s journey of living out Taylor’s book. They are companions: one a mentor, an experienced clergywoman with laugh lines and reassuring hands and a ready cup of coffee. The other a fellow young adult, navigating what Christian life looks like after the fires of honeymoon-passionate faith have receded into silence and loneliness and desert places.

“Desert places.” We always used that term in my on-fire days. Namely, in the context of the popular worship song. I still love the song, but what I didn’t know back then was that there is a difference between anxiety and spiritual attack, between depression and not “doing enough for God.” I knew what it was to struggle back then, but the real desert place was still to come.

There’s a lesson to be learned in these true spiritual dark places, where we need to rest our performance-driven, controlling, anxious hearts and simply let the season change. Say yes to a wander through the wilderness. Learn to walk in the dark. Put our keys in the ignition and do a little night driving. 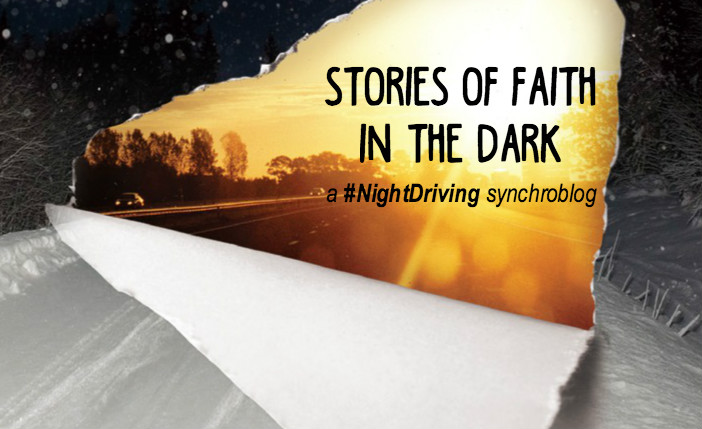 Linking up with the “Night Driving” synchroblog today. Head over to Addie’s blog to read her post, others’ reactions, and to add your own story. From her post:

What mysterious have you touched on as you’ve fumbled around in this unfamiliar place?

What things became your touchstones when the lights went out? Were they what you expected?

I know it’s all a little vague. (Darkness usually is.) Go anywhere you like with these prompts, or go completely off topic.

Start here, if you need a place:

You wouldn’t believe what I saw.