Before coming to Christianity Today, I was the founding managing editor of MORF Magazine, a spiritual formation publication for youth pastors, volunteers, and parents of teenage Christians. MORF was published by Student Life (a division of LifeWay Students) and included a quarterly magazine, a bimonthly newsletter, and a weekly blog. 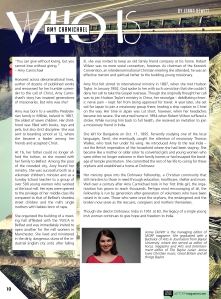 Who Is: Amy Carmichael

“Honored across denominational lines, author of dozens of published works and renowned for her humble surrender to the call of Christ, Amy Carmichael’s story has inspired generations of missionaries. But who was she?” 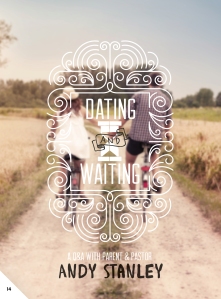 Dating and Waiting: A Q&A with Andy Stanley

“Andy Stanley, the founder of North Point Ministries, is perhaps most well known for carrying on his father’s legacy as a prolific preacher and author. His latest book, ‘The New Rules For Love, Sex and Dating,’ boldly pushes past the Church’s typical playbook when confronting young people about their sex lives. He didn’t hold back when we asked him what youth ministers, youth workers and parents should know about teen dating and sexual purity.”

Shaking the Planet with Praise

“From Melbourne to Maryland to Malaysia, Planetshakers takes their name literally, leading worship in sold-out stadiums all over the globe. Since their founding in 1997, they have produced 20 albums, most of which were recorded live at their annual conferences. The Australian worship band sat down with MORF while touring the US to share how they engage teens in praise.” 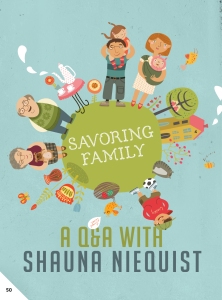 “Author Shauna Niequist knows the balance of family and ministry from both perspectives: as a parent herself and as the daughter of Willow Creek megachurch pastors Bill and Lynne Hybels. In Shauna’s new devotional, she provides 365 ways to savor life with God, friends and family.”

The Case for Grace-Filled Student Ministry: A Q&A with Lee Strobel

“In his bestselling ‘The Case for___’ series, author Lee Strobel seeks the answers to popular and personal doubts about Christianity. In his new release, ‘The Case for Grace,’ he continues to use his experience as an award-winning journalist to investigate the concept of God’s grace through the stories of those who have encountered it firsthand.”

Who Is: William Tyndale

“On the surface, William Tyndale’s early years sound privileged and comfortable for the 16th century. He had every chance to live a long, happy life for the time period. His theology, however, eventually led to his martyrdom.”

The Family of God: Ministering to Adopted Teens

“Adoption and orphan care have become trendy topics among Christians. But is the Church itself equipped to minister to adopted teens and their families? Anyone who has been there will tell you: it can get messy. From grief, abusive pasts and anxiety to attachment disorders and developmental concerns, there are unique challenges that adopted teens – and their families – must overcome. Youth ministers and youth workers have the opportunity to help with this transition.” 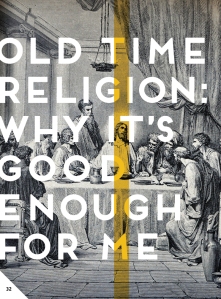 Old Time Religion: Why It’s Good Enough for Me

“The word ‘religion’ used to sound comforting, something that provided refuge and even inspired pride. But somewhere along the way, the birth of pop Christianity with all its media, T-shirts and bumper stickers had transformed ‘religion’ into an insult, a term used to separate true believers from the unenlightened who were “just going through the motions.’ After all, ‘It’s not a religion. It’s a relationship.'”

Who Is: Lottie Moon

You may have donated to her Christmas offering or heard her names in the stories of the great missionaries of the past, but who was Lottie Moon?

Ending the Mean Girl Mentality: A Q&A with Annie Downs

“Author, blogger and speaker Annie Downs wants to inspire a revolution by calling on girls to use their words to “speak love” to one another, their families, leaders, even over themselves. Her goal: ending the mean girl mentality and bringing true freedom in Christ to teens everywhere. Each chapter of her latest book, titled ‘Speak Love,’ addresses a different way girls can use their words to live out their identity in Christ.” 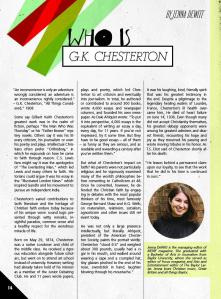 Who Is: GK Chesterton

“G.K. Chesterton’s varied contributions to both literature and the heritage of Christian faith endure today because of his unique voice: sound logic presented through witty remarks, insightful paradox, common sense and a healthy respect for the wondrous miracle of life.”

A Life of Mission: A Q&A with Kathleen Wintter

“Birmingham, Alabama, native Kathleen Wintter has spent nearly 19 1/2 years in Timisoara, Romania as a missionary. The last three of those years she has served and taught English to U.N. refugees at the Emergency Transit Center (ETC). The refugees only stay until they are relocated to a more permanent home, so Wintter often has half a year or less to invest in their lives, a high turnover rate that challenges her to rely on God with a beautifully bold faith.”

“Ocielia Gibson has an impressive résumé. Beauty pageant winner. Celebrity advocate. Ministry founder. Mentor. ‘Unsung Hero.’ Speaker. But the name she is most passionate about isn’t her own. It’s teaching teen girls about the True Famous One: Jesus. As an overcomer of fatherlessness, self-hate and culture’s misperception of beauty – Former Miss Black USA Ocielia Gibson is passionate about sharing her honest message of perseverance, real beauty and affirming choices for girls and women in Christ.”

“One overriding message about the Millennial generation – one we hear loudly, clearly and constantly – is that we are spoiled brats, self-focused and entitled, living in the delusion that we are ‘special.’ While selfish narcissism is a typical characteristic of middle class Western youth, entitlement is unique.” 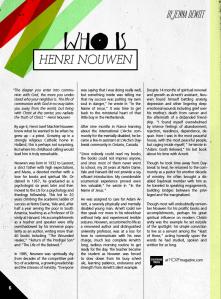 Who Is: Henri Nouwen

“By age 6, Henri Josef Machiel Nouwen knew what he wanted to be when he grew up – a priest. Growing up in a strongly religious Catholic home in Holland, this is perhaps not surprising. But where his childhood calling would lead him is truly remarkable.”

Max Lucado Says You’ll Get Through This

“Have you ever been thrown into a pit by your own family? Had your metaphorical coat of many colors ripped to shreds by jealous brothers? We all encounter unexpected trials and troubles, which often leads us to ask God some tough questions. In his latest book, Max Lucado addresses the question behind all the others: will we ever get through this?” 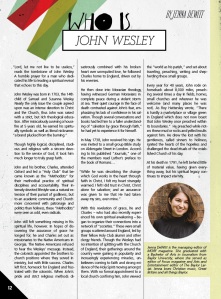 Who Is: John Wesley

“‘Lord, let me not live to be useless,’ reads the tombstone of John Wesley. A humble prayer for a man who dedicated his life to leading a spiritual revival that echoes to this day.”

The Beautiful Mess of Girls’ Ministry: A Q&A With Annie Downs

“With a passion for mentorship and relatable authenticity, Annie Downs speaks into girls’ lives both in her local community and on a national stage. The author of ‘Perfectly Unique’ and blogger at Annie Blogs took some time out of speaking on the Girls of Grace tour to share what she’s learned so far in student ministry, and girls’ ministry in particular.” 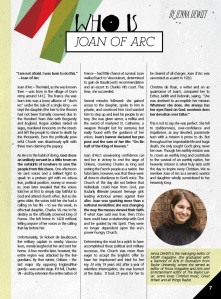 Who Is: Joan of Arc

“Joan was sparking more than a national revolution; she was changing the way the masses viewed their faith. If what Joan said was true, then Christians could have a relationship with God and be guided by His Spirit. They were no longer dependent upon the era’s power-hungry Church.”

“Youth minister Nick Hall travels around the United States with Winter Jam and PULSE student ministries speaking to teens from all walks of life. Many of these teens approach Hall after his talks, confessing to dark struggles, pain and addictions. He offers some wisdom from his experience helping these teens pass through these shadowlands back to joy and life.” 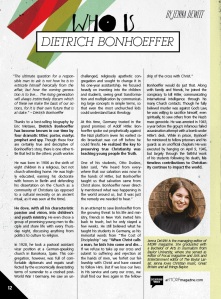 Who Is Dietrich Bonhoeffer

“Thanks to a best-selling biography by Eric Metaxas, Dietrich Bonhoeffer has become known in our time by four dramatic titles: pastor, martyr, prophet and spy. Though these four are certainly true and descriptive of Bonhoeffer’s story, there is one other title that led to the others: youth worker.”

Preparing for a Mission Trip

“It’s no accident that short-term mission trips are nearly synonymous with teenage Christian life. How to lead a group of teenagers into the mission field, however, can be a mystery to even the most experienced youth minister.”

“Last year, San Antonio youth minister Gavin Rogers made the decision to give up “home” for Lent. He remained active in his youth work at Trinity Baptist Church during the day, but outside of work hours, his life looked radically different than that of the typical single, young seminary graduate.”

Who Is: Corrie ten Boom

“One of the most enduring Holocaust stories comes from German-occupied Holland where a pair of middle-aged sisters and their elderly father decided to serve God and His people no matter the cost. Only one of the sisters, Corrie ten Boom, lived to tell their story of miraculous provision, remarkable courage and unlikely forgiveness.”

Daniel Friedmann on Science and Faith

“The Barna Group has found that around half of today’s teens plan to enter science-based careers, and about one quarter of all youth view the Church as anti-science. This tension between faith and scientific ‘fact’ has compelled some teens to walk away from their religious backgrounds completely. CEO, engineer and author Daniel Friedmann says this divide isn’t necessary. His research, explained in his book ‘The Genesis One Code,’ suggests that high school biology and Sunday School theology are compatible.” 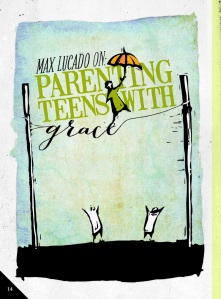 “This fall, bestselling author Max Lucado is releasing a new book written especially for teenagers titled ‘Wild Grace.’ The message? That teens would know their identity doesn’t lie in their struggles or mistakes, but as children of a God who loves them. From this life defined by God’s grace, they can then show grace to others in their daily lives.” 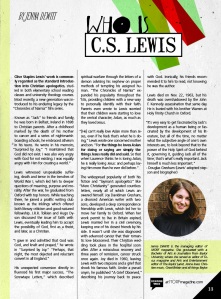 “Clive Staples Lewis’ work is commonly regarded as the standard introduction into Christian apologetics, studied in both elementary school reading classes and university theology courses. Most recently, a new generation was introduced to his enduring legacy by the ‘Chronicles of Narnia’ film series.”

Bridging the Gap: A Q&A with Carl Gulley 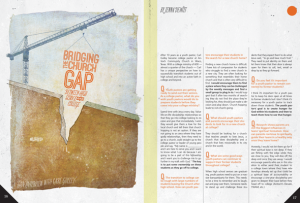 “After 10 years as a youth pastor, Carl Gulley became college pastor at Antioch Community Church in Waco, Texas. With a college ministry of 600 — almost a quarter of the church — Carl has a unique perspective on how to successfully transition students out of high school and into an active faith in college and beyond.”

Who Is: St. Francis of Assisi

“Beyond founding the Franciscan order and being posthumously named patron saint of animals and the environment, we know St. Francis because we can relate to the man so many admire.” 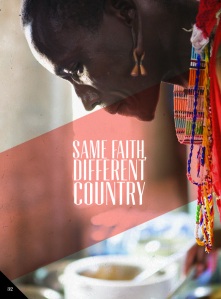 “MORF had the privilege of talking with five students from Kenya. The students, members of Compassion International’s Leadership Development Program, spent last summer speaking to kids and teens at Student Life camps about how they can change a child’s life through Compassion.”

“Today, ‘discipleship’ has become interchangeable with anything from one-on-one mentoring relationships to service projects to accountability groups. The sacrifice of modern-day disciplers remains the same: devoting vast amounts of time and energy to helping teens transform into disciple-makers themselves.”

A Life of Legacy

“During the final worship session on the last night of summer camp, James Eunice made a decision. He would make a difference in his senior year, “no matter what happens.”

God’s Hands in the Rubble

“The spring of 2011 seemed merciless to much of America. Extreme droughts turned into raging wildfires while a few states away, floodwaters breached levees.

Then came the tornadoes.”