Y’all. There are so many good books coming out this year.

Seeing as I’ve been a bit MIA since OCTOBER, I’m doing some re-imagining of what this blog will look like in this new season. You see, that last post was inspired by a job offer. In the end, I moved from sunny, sweaty Texas to the frozen snowglobe that is Illinois. I now live very close to a train station that can take me into Chicago any time I like. I have lovely co-workers who know how to play hard and work hard. And I spend more time editing.

Which means I don’t spend time reading and writing about books for work anymore.

But there are SO MANY good ones. As I said.

So I have joined a launch team or two in hopes that I can still tell you about authors I love and books I enjoy on a regular basis. I don’t promise to post a lot, but more than never, so that’s an improvement. 😉

I am going to attempt to figure out Amazon affiliate links, but promise to always tell you the truth about what I thought. In Texas, they call it “shooting straight.” That’s what I aim to do here (pun intended, as always).

With a title like “The Only Pirate at the Party

,” how can you not be in love with this book before even cracking open the cover? I am especially looking forward to diving into this one, which I’ve had on my bookshelf for over a month now after attending a book signing party. Lindsey is a phenomenal performer – known for her fantastic YouTube videos as a dancing violinist – but she is also known to her fans as a woman of faith, loyalty and courage, standing for her beliefs even when it’s not the cool thing to do.

Speaking of Southern sayings, one book on my Amazon wishlist is Sophie Hudson’s “Giddy Up, Eunice: (Because Women Need Each Other)

” about our relationships as women. I love the way Sophie writes about her Southern culture and family. I first discovered her while living in Birmingham and was lucky enough to hear her speak to our office book club about her last book, “Home Is Where My People Are: The Roads That Lead Us to Where We Belong

.” It’s a delight. Her first book, “A Little Salty to Cut the Sweet: Southern Stories of Faith, Family, and Fifteen Pounds of Bacon

” is the one that hooked me, however. Snatch ’em up and be prepared to laugh, cry, and cook something fried with bacon.

Annie Downs won me over a long time ago with her books “Perfectly Unique: Praising God from Head to Foot

” and “Let’s All Be Brave: Living Life with Everything You Have

.” I had the privilege of interviewing Annie twice for MORF (here and here) and meeting her at a Girls of Grace event. Let me tell you, this girl is the real deal. She is funny and authentic and has a brave heart, especially when it comes to sharing the hard parts of her story so others don’t feel so alone. And really, that’s what this list is all about. 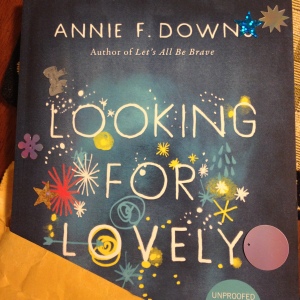 I can’t wait to read her latest, “Looking for Lovely: Collecting the Moments that Matter

.” I’m honored to be on her launch team for this book, though I haven’t had a chance to dive in yet. I’ll let you know in a future post how it was, but I have no doubt it’s going to be another homerun. After all, confetti poured out of the package when I received the ARC, so that’s a sign right there.

When I heard the blogger and author behind Momastery was coming out with a new book –  Love Warrior: A Memoir

– one that was more revealing than anything she had posted before, one that told the story she had refrained from sharing thus far – I had to at least see what it was about.

Well, as a wife and mother, she obviously has a story that involves marriage and parenthood.

But it’s more than that. Just like her blog (which is why I read a blog with “mom” in the title). It’s about what she calls the “brutiful” life – beauty in the brutal. It’s about being a woman in a world hellbent on destroying us.

A while ago, one of my favorite bloggers and internet friends, Addie, messaged me on Twitter. She was coming out with a new book and knew her first one, “When We Were on Fire: A Memoir of Consuming Faith, Tangled Love, and Starting Over

” had really resonated with me. (I was pretty enthusiastic about my support on social media. haha It’s one of those books you just can’t stop sharing quotes from!) Addie asked if I wanted an ARC of

“Night Driving: A Story of Faith in the Dark

” and shared the vision behind it. Friends, I had to remind myself to keep breathing when I read that book summary. Once again, though the literal details were different, the spiritual and emotional elements were eerily close to home. I told her “Yes, of course!” but I was really thinking “Oh, thank God. It’s not just me who has been through these things and felt these things.” But that’s what I love about Addie. She can write her own story with vulnerability and devastating honesty, yet her readers never feel pity or judgment for her. Only “You too? I’m not alone!”

I’m specifically looking forward to these books because they are the “what now” after the storm comes. Like last year’s “Rising Strong

,” where Brené Brown followed up on “Daring Greatly: How the Courage to Be Vulnerable Transforms the Way We Live, Love, Parent, and Lead

.” She said a lot of people had read the book, dared greatly, then were left saying “now what? Where do we go from here?”

And I think that’s important with memoir especially. At least, memoir that shares a life lesson or spiritual journey. It’s important to get down in the pit and wrestle with our demons, but once we’ve been there and emerged, victorious or not, bruised and bloody, how do we walk away? How do we keep that fight in our hearts going strong and not hit rock bottom again? Or maybe we do. How do we get up and forgive ourselves?

I think a lot of those books will “go there” with varying levels of intensity. Plus, we’ll explore some fiction like Erin Hicks and Megan Beam’s The Last Beholder

. Join me on a reading adventure this spring and summer as we read them together!